I think by now, everyone knows how much of a trainwreck the Wii U was. Despite Nintendo fans defending it until the Switch was announced, the Wii U was a massive failure. It was underpowered, poorly marketed, relied on a gimmick as Sony and later Microsoft started moving away from gimmicks, and despite a strong launch lineup, was mostly defined by new installments in Nintendo franchises that just like that of most Asian developers, were just the same game you played years ago but with a new coat of paint on them. Not even Smash Bros (Also on the Nintendo 3ds) could save the system, and many games were later ported to the 3ds or Switch. Nintendo then ended up announcing the Switch to reverse failing fortunes, and it was hyped up for a while, and that’s about it. It’s been several months now into the lifespan of the Nintendo Switch and well, it’s a pretty mediocre system. It suffers from a lot of the same flaws as the Wii U did along with some flaws of its own, despite the obviously increased interest in it compared to that of the Wii U, and here’s why.

The Switch is a handheld gaming console, I know I know, and it costs only $300. It’s based on the Nvidia Tegra X1 SoC, down to the fact that it’s bootloader exploits also work on the Pixel C as well. As a handheld console, it’s state of the art, has by far the best hardware, and has a gaming library better than any Android device (if you don’t count emulation, of course). Still, it’s perhaps one of the biggest handheld gaming consoles ever made, being on par with the Atari Lynx family size wise. 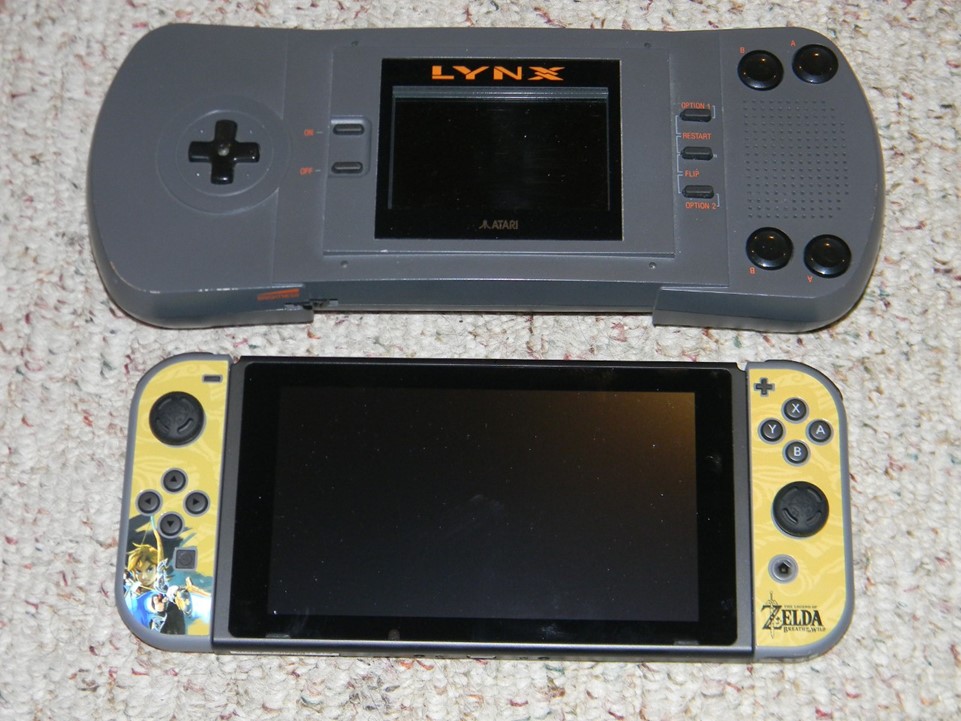 As a home console though, it is weak and underpowered, being an Ouya if it had nicer games on it. Games don’t run very well and putting big console games and downscaling them is seen as a technical achievement due to how weak it is. If you get to play the big games on your Switch, they’ll run at low framerates, at 360p with a Vaseline filter over it.

You know what the Wii U was also known for? Being underpowered compared to other consoles, with even Call of Duty running worse on it as well, except it was even more laughable because it was weaker than a console from 2005, you know when people still had flip phones, Windows XP laptops with hot Pentium 4 CPUs, and Hummers.

Now sure, Nintendo fans who have never touched a compiler will say that graphics don’t matter, and in a sense they’re dead wrong.

The game library is terrible

The Nintendo Switches library could consist of several categories of games. It has generic indie titles, it has ports of Xbox 360 games, and it has Nintendo exclusives. The indie games nobody cares about (and only seem to exist to pad out the Nintendo Switch game list on Wikipedia), the 360 ports are alright if you’re rich enough to spend $300 on a console with few games, and the Nintendo exclusives are why most people are buying the system. It has the core lineup of Nintendo games that change little, change so little that many of them are Wii U ports, from Zelda to Mario Kart to Captain Toad (seriously) to Pokken. There are a few originals, like Splatoon 2 (a reskin of 1), Mario Odyssey, and Super Asset Flip Bros 5. It’s a lineup of games from only one developer, and only one publisher. It attracts an audience, though not the kind Nintendo is shooting for. It doesn’t attract the mass market as much as it attracts broken, low-T nerds whom worship new shiny toys, a very specific image that has given rise to memes. 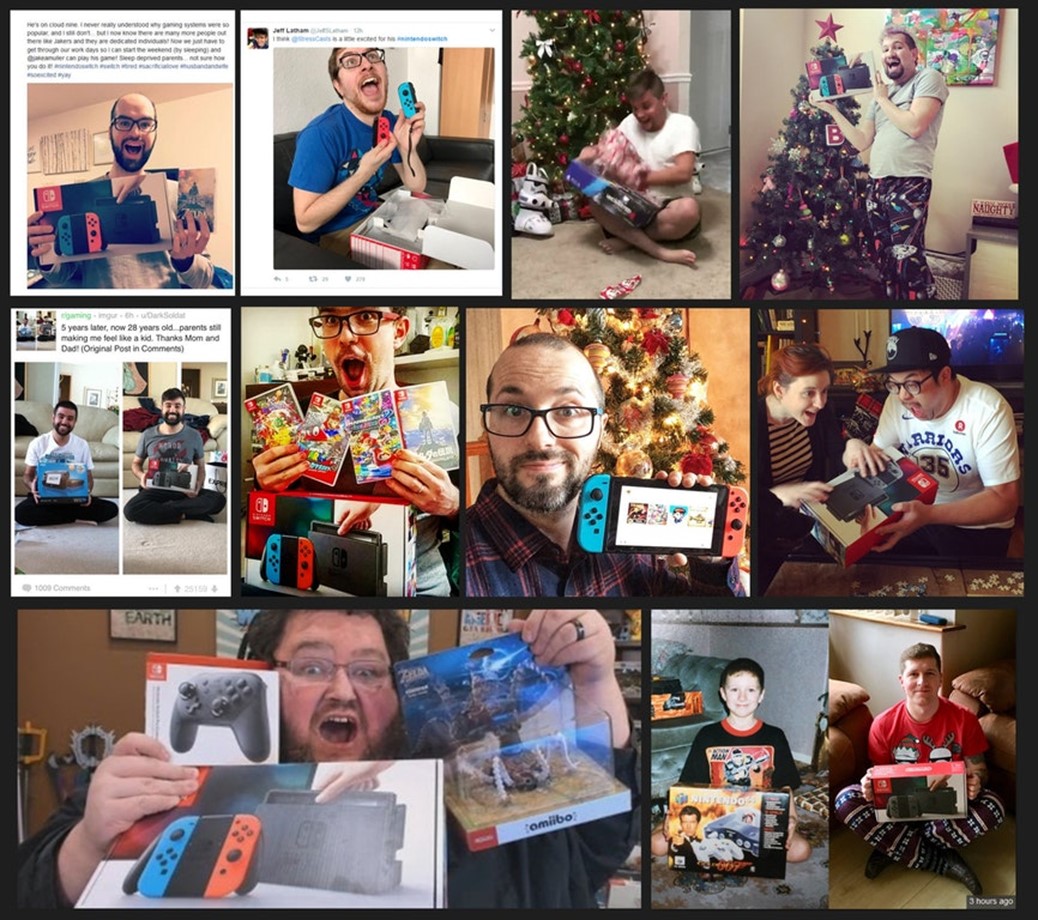 If you look at the upcoming games list anywhere, it’s barren. You’ll see indie games, you’ll see Nintendo exclusives, you’ll see ports, and that’s about it. There’s not a whole lot of games making the console worth spending $300 on. Maybe it’s because it’s weak, maybe it’s because the install base is pretty small or that Nintendo fans had a history of simply not buying third party Wii U games, but it’s barren. Furthermore, the high amount of Wii U ports creates an issue: If you’re cheap, why buy a Switch when you can get most of the same games on a pawn shop Wii U, and I know someone at my old job who bought a Wii U for that very reason. Hell, GameStop has Wii Us for $129 nowadays.

You know what also had a strong launch lineup and few games afterwards? The Vita and Wii U. This leads to a situation with angry customers trying to justify their purchase, one known as…

If you find a new retro indie game, or some other big game, one of the comments you’re guaranteed to find in the comment box is “Where is the Switch version”. This is perhaps the most telltale sign of a struggling console, when developers avoid making games for the Switch in favor of the consoles that are selling. This is a trend you’ll see both in the modern day, with the Wii U and Vita being good examples, and in the past with many consoles having publishers drop support for them as they’re on their death spiral, or in the case of EA and the Dreamcast, straight up boycotting making games for said console after the last console was such a dud saleswise.

Port begging is when a group begs a publisher to make a port for a platform they like, and while you see this with the PC quite a bit sometimes, most of the time it’s when a console struggles so much that the fans have to beg publishers to make games for their failing console. This happened with the Wii U and to a lesser extent the Vita, and while the Vita chugged along even as physical releases were skipped over for the west or as Vita exclusives were ported to the PS4 and PC for western releases (due to its popularity in Japan), the Wii U on the other hand was a total trainwreck, with a lineup consisting of only new Nintendo games, games that were barely different than the last installment for the most part.

This leads to many comment boxes being clogged up with “Where’s the Switch version at?”, as $300 console owners realize they got jipped for a console that was promised to play more games than you idiots have brain cells. After all, even as internet gamers bitch and moan about a console being a success or flop, real success is decided by what sells. Just look at why electric cars are still a niche and SUVs are a success, much to the disdain of feel-good lawmakers, or why you can’t find diesel station wagons with stickshift very often for sale in the USA despite that being what some auto enthusiast would buy, or why the Xbox One was declared a “failure” before it was even in stores and yet has more games than the Switch does, especially big-name games that people actually want to play.

The Nintendo Switch only has 32gb of storage. While the Xbox One and PS4 have 500gb drives as a minimum (that take longer to get eaten up), the Switch only has 32gb of storage. The Wii U also had 32gb of storage on the highest end mode. Furthermore, you need to use a MicroSD card, and those only go up to around 256gb. There’s now 512gb microSD cards, and they cost more than the Switch does, at around $350 when they launch. The Switch also does not support USB storage, meaning you can’t use an HDD. There are now games that eat up storage like crazy now and need a MicroSD card and download to install the game as well, and this means you end up having to spend tons and tons of money on flash storage.

Here’s something the Switch has the Wii U lacks: quality issues. The Wii U was mostly a solid system. Sure, there were issues with it, like bricks from failing NAND memory, the laser issues that have plagued every single console since the rise of the compact disc, temperamental kids or manchildren smashing the screen of the controller after matches of Smash 4 or alcohol fueled madness, or the controller’s vampire drain, but it was relatively solid.

The Switch on the other hand has had issues, from joycon issues (This happened on my friends), to launch day problems, to a relatively new issue where the console cracks. Furthermore, Nintendo UK wanted 180 good boy points to fix the plastic. Ouch. Nintendo isn’t the same Nintendo that made Game Boy consoles that could survive wars, or tantrums from angry kids.

With all these issues, it’s no wonder I have not bought a Switch. When I’ve had the money, I’ve just avoided it, and my wallet thanked me. It’s a waste of money for a console that is essentially the new Wii U or Vita.