Every time you fire up your computer and go online, you already know the battle cry of a broke nerd. “I hate being broke”. Lurk on the section of Twitter where insecure nerds cling together like glue and you’re guaranteed to see a few things for certain. Amazon wishlists. Gofundmes. Paypal.me links. Patreon links. And of course my favorite, a long post about how rent’s late/my shitbox broke down again/I’m literally going to die if I don’t get lifesaving surgery…oh wait it’s just a sex change operation please don’t tell people this I need the money literally right now. In a sense, these people never grew out of the childlike mentality of begging for money. They need the money, and they LITERALLY NEED IT now. It’s no different than a little shit in a toy store begging for toys because he literally needs them because he saw a cool commercial on TV or all the other kids at school had one and he’s the one kid who didn’t.

Then while they’re begging for life expenses, what does their feed show? Oh, they bought a new gaming laptop. Oh oh oh, they bought a new Nintendo Switch. Oh they bought some anime figures, or blew all their money on the Steam sale on games they’ll never play (look how many epic memes exist about Steam sales killing wallets). Oh they bought an Apple iPhone or “flagship” Android phone in the $750-1000 price bracket that they’ll complain is slow in a year. Oh, they bought furry porn commissions. Oh nice you got they got their tax return, time to blow it all on video games instead of saving it or putting it towards life expenses. Then they go on the internet to bitch and moan about how the system fucked them over and how they need rent. The worst part is, these people are unable to admit that the problem is them, and they’ll go online angry whenever people call them out.

Being online has made me learn that nothing makes people angrier online than being called out for their poor choices, and this Twitter thread is a great example of this. The original tweet mocked this very behavior, the behavior of white 20somethings who blow their money on luxuries instead of life expenses. 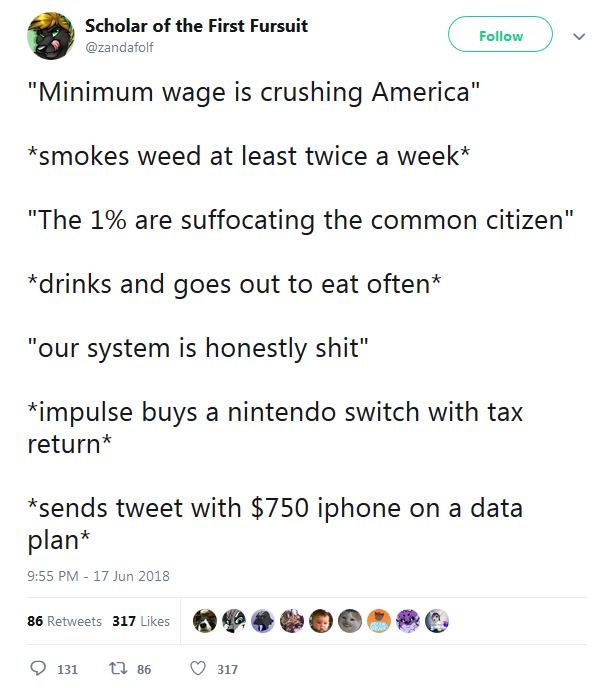 Any Twitter addict can see the ratio and know it’s going to be a salt (or gold) mine, and while some replies agreed with this a lot of hedonistic furries who’s solution to their fucked up lifestyle choices is to “escape” reality had to chime in, and man some of these replies are gold. For example, here are a few replies that all have the same theme: Enjoying life is about the shit you buy, and downing it out with a few substances as well. 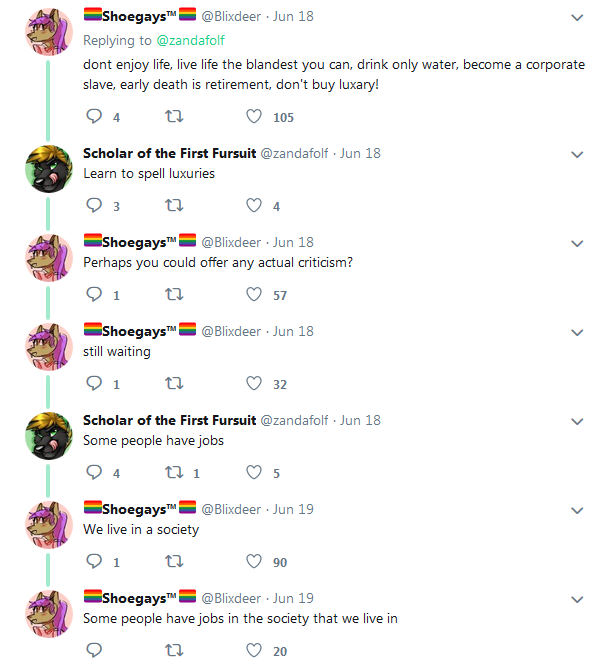 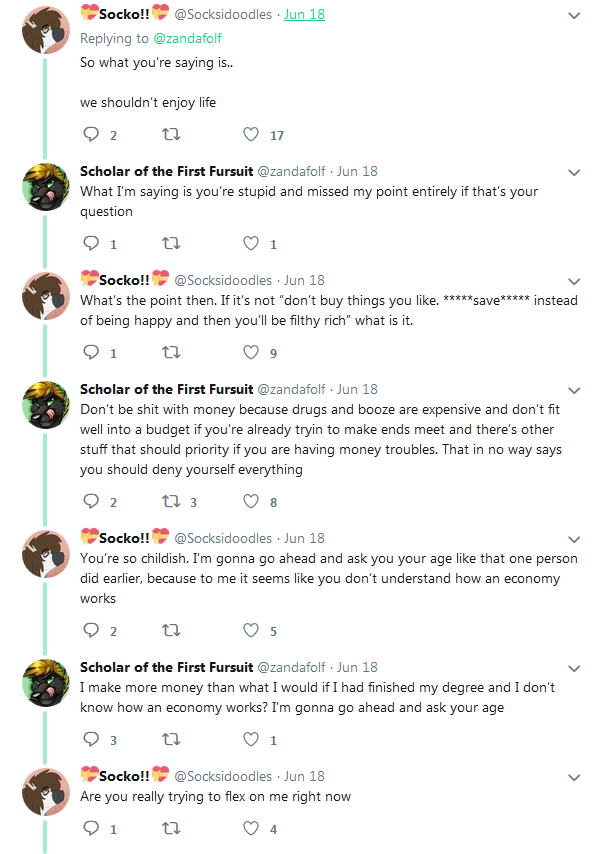 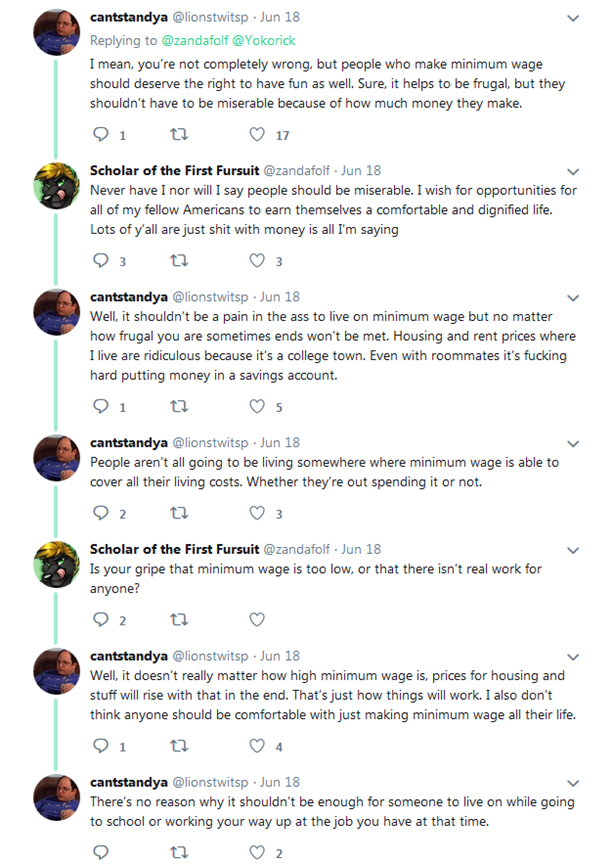 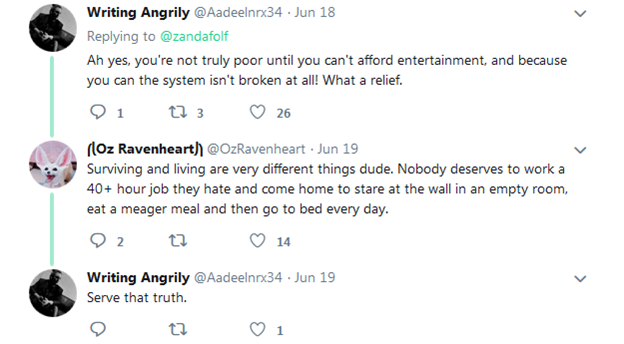 These tweets are reflective of the thought process of these types of people: Enjoying life isn’t about what do you do in life, it’s about consumption and “having fun”. You must spend your money on nice stuff to drown out your miserable existence, even though eventually the money issue hits you and you’re too busy getting desperate for money. They want to life cushy lives despite the cushy life being out of their means and unsustainable, which leads to the same cycle of “I hate being broke” despite living in a nice apartment and owning the newest video game consoles. They must have the new iPhone, to the point where they’ll even make meme comics to tell the whole world just how much they need to have their new iPhone. Bling Bling. 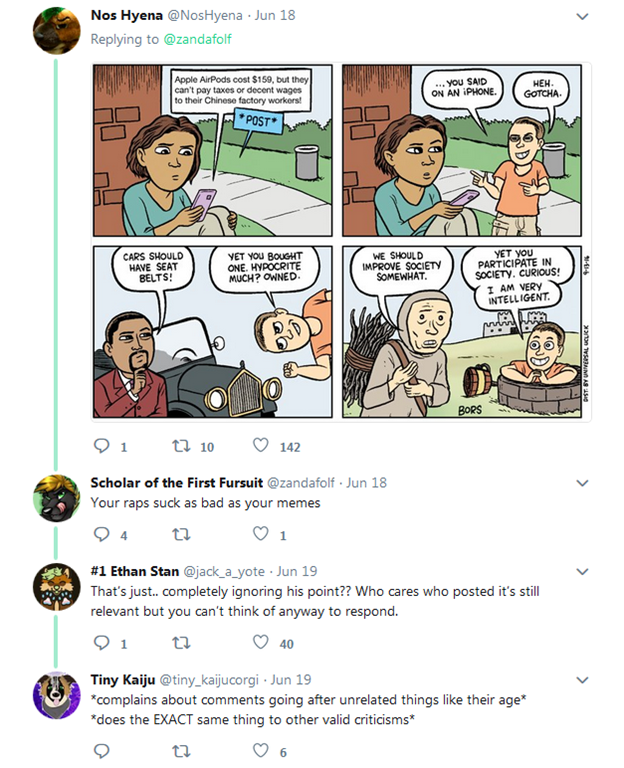 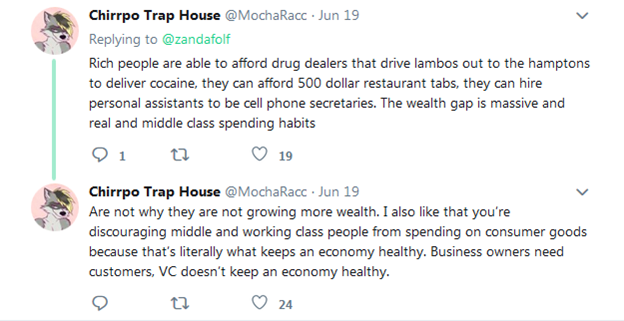 There are comments from people who didn’t do the research, and live in towns with jacked rent and high costs of living, or who choose to remain in poverty instead of getting their shit together. 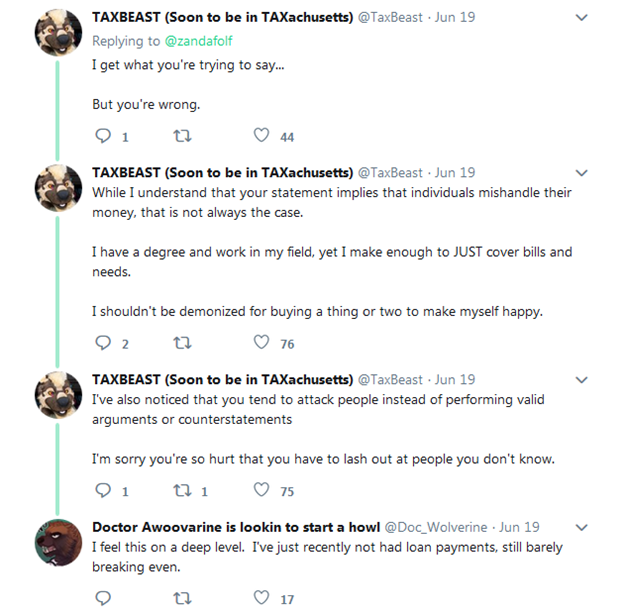 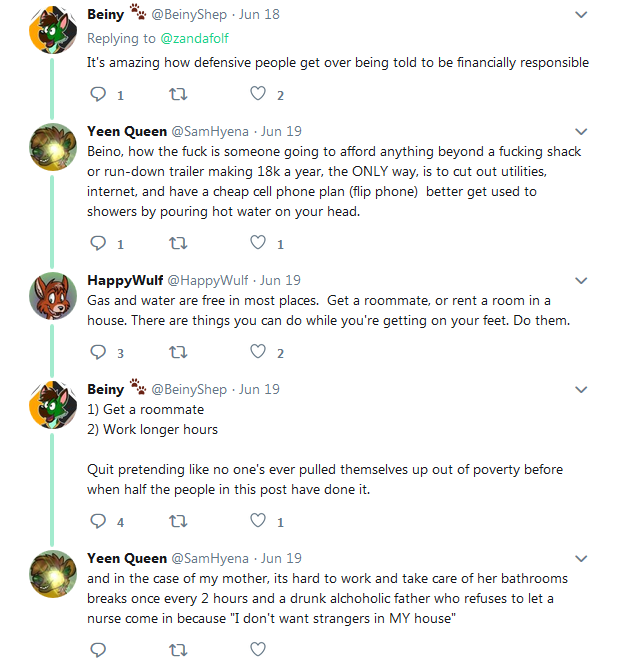 There’s even the comical “Everyone I don’t like is X” posts as well. 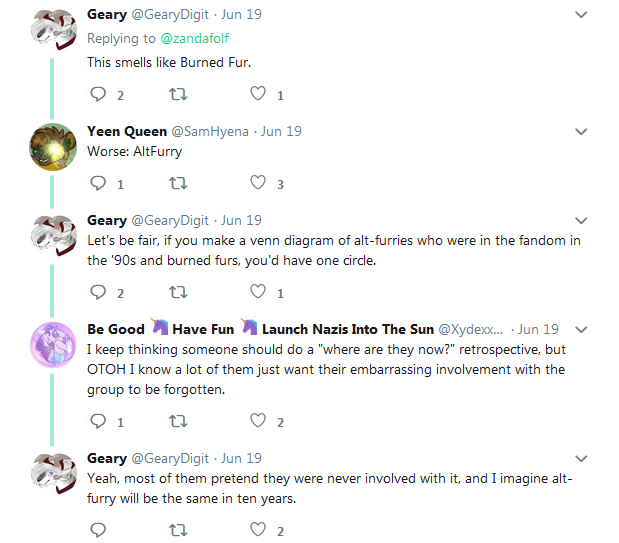 Alright so I think we’ve had enough time laughing at these people because when it comes down to it, these people are all the same, all cut from the same cloth, they’re about as interesting as store brand soda. The point is with these people, financial responsibility and getting their life in order don’t come first, getting those pleasures comes first. Playing $60 video games, consuming substances, trying to live the “good life” even when you can’t afford it comes first, and white nerds aren’t the only people who do this. Just look at the slang term “hood rich“, and count the number of people who are broke with iPhones, Jordans, Beats, who ride public transit, or spot the 2007 BMW parked in your local shitty apartment complex. 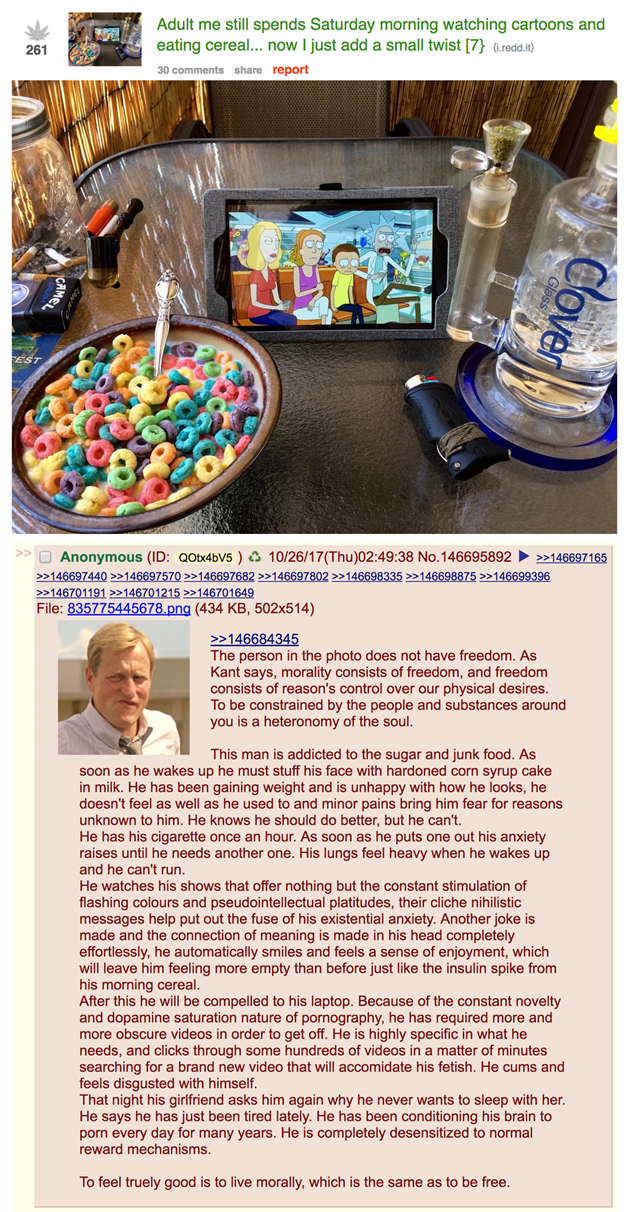 But how can you avoid this situation? Well, I was able to do it, and so can you. The first thing you need to do is to admit that you’re not spending money well enough, that you have zero money set aside for when shit truly hits the fan (For example: A car accident, a tire blowout, your shitboxes transmission failing, medical bills that aren’t due to self-induced conditions thanks to your hedonistic lifestyle, etc.). Look at these people and ask yourself this, do you really want to live on donations and someone else’s dollar all your life?

Then, you have to do what I’ve done to curb excess purchases. Ask yourself every time you slap cash down somewhere, do I really need this? Will I regret this afterwards? Will I actually use this, or will it go in storage/get sold at a loss afterwards?

This one thought has curbed so many unneeded purchases I could have made, and has saved me from regretting it later. I’ll also wait for prices to drop and buy something used, or in the case of games, when the hype dies down and they go down in price, especially since so many hyped up games are cheap now and if they’re good, they should still hold up minus all the hype and release drama.

Another good thing to do (and this is critical with big purchases) is to do the research. Don’t throw money on something you’ll regret with big choices like medical decisions, car or home buying, or buying expensive technology. Do the research and see how good it is or bad it is first before you toss money at something, regretting it later.

And of course, here’s the most important thing: Learn some skills, learn a trade, learn something that’ll get you a decent job. I’ve got a SGI Octane right here in my basement which I’m going to learn MIPS assembly on, along with C as well to get some good programmer skills, and maybe write a few programs as well. If that fails I’d be willing to learn a trade as well so I can end up getting money somehow, something that a lot of lazy Twitter addicts are unwilling or unable to do.