It’s just another day in current year, and you’ve got your pricey Samsung Galaxy S9 out. You find someone who seems interesting, maybe they made a post or art/music/videos you like elsewhere, or maybe you met them IRL and they seem like a chill person. So you exchange contact information or click on a link, and you go to check out their Twitter account. 5-6 years ago, you’d likely see pictures of something they did, or tweets about that nice value meal they got at Wendy’s. However, this isn’t 5-6 years ago, this is current year, and instead of seeing what is on their profile, you get a nice little message. 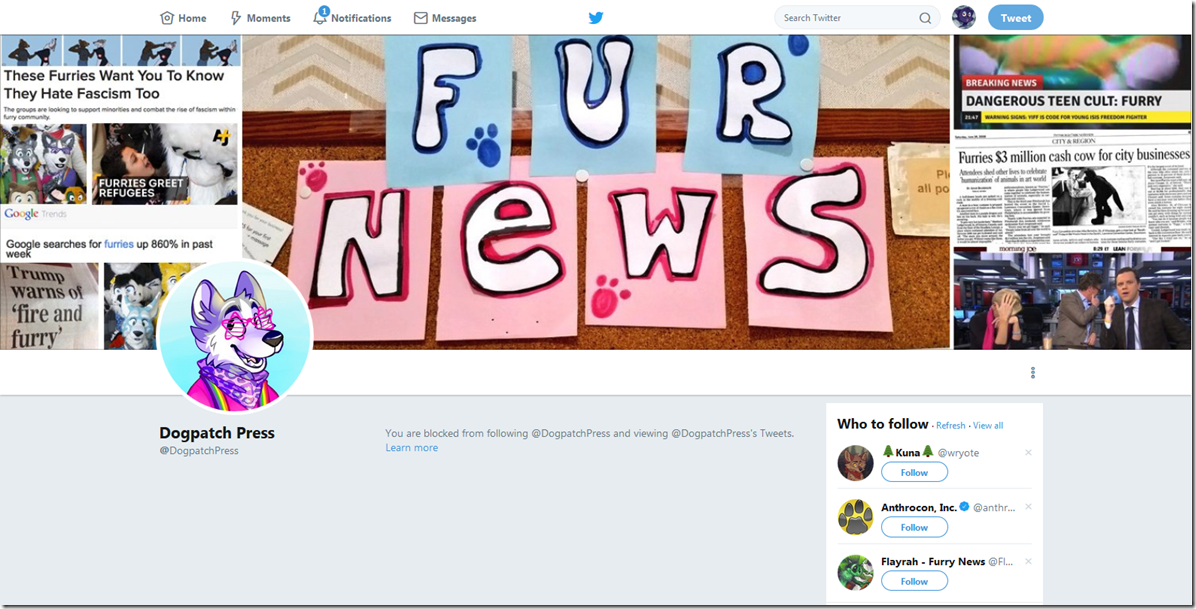 Here you are on Twitter, staring at this message on your smartphone in disbelief. You’ve never talked to this person yet, yet you’re already blocked. So you ignore this person, thinking maybe this person is a sociopath. Maybe it’s just them. Not long after you bump into someone else who already blocked you, and another, and another, and at that point you start to wonder what the hell is going on, and how you got blocked by so many people you’ve interacted. Congratulations, you’ve fallen victim to something that everyone who uses Twitter long enough falls victim to: The blocklist.

Now what is the blocklist you might be asking? Well simple. It’s a list of a bunch of people you’ve decided to block on Twitter, and because Twitter allows your block list to be seen through it’s API, websites such as blocktogether have popped up that allow anyone to make a global shared block list anyone can subscribe to, with individual lists being marketed under the claim that they allow you to block “problematic” people online. Case in point, the now mostly defunct website simply called “The Block Bot”, where people were oftentimes added to it solely for disagreeing with others in online flamewars. While sometimes these lists are built from scraping info (for example, “ggautoblocker” and it’s algorithim which blocked people who followed specific Twitter accounts), oftentimes they’re built from the owners of the blocklists pooling up their block lists together. Sometimes they’re even edited by internet vigilantes who leak groups, and toss everyone on the list, even if they’re in said groups to watch and laugh or also leak, or in a friends case if the group is 100% apolitical. I’ve even seen people block others on Twitter for merely being friends with someone they have a grudge against. When you have tons of people using your list, you have a lot of power on who they see and can interact with, which sounds an awful lot like a cult.

Furthermore, they’ll offer appeals to get off the blocklist, and if you’re lucky or friends with them now you’ll get off. Chances are though, you’ll get ignored, told to fuck off, or maybe shown evidence of your alleged crimes, crimes you had no idea you commited until you were told about them. Some blocklists will be nice and post “reasons” for the block, while others such as lists made from other peoples blocklists or username scraping won’t give you a way to see what your alleged crimes were. Meanwhile in public, they’ll brag about their bold goal of blocking “the wrong kind” of people.

So these websites which are marketed towards “blocking” people who you deem problematic turn out to have another purpose entirely, to block people the owner or his friends have a personal vendetta with. Get into a fight with the leader or one of his pals and you can end up on a block list that plenty of overly political drama queens are on. If you joined a group the owner dislikes, you can expect to get blocked by him too, and then get blocked by a ton of other Twitter accounts you’ve never interacted with. Sure, most of the people using it are likely going to be easily offended types whose greatest achivement in life is cooking fries at McDonald’s or mentally broken adults who still act like teenagers, and all around shitty people (think the kind of people that throw you under the bus for minor things) yet you’ll likely have at least one or two people using it out of naivety, falling for the pitch online that it’s going to block only the bad people.

But for every naive person who uses it, a lot of the people using it tend to act like middle school girls with regards to people online, and in some cases even offline. Just like how Reddit’s shadowbans became popular on other websites such as Twitter and YouTube, people who use block lists like to spread the same idea elsewhere. For example, you have Reddit banning people who post even just once in specific subreddits from other subreddits, and not only have people gotten bans for this but on some subreddits like KotakuInAction there are even warnings saying if you post here you will be banned from a lot of subreddits, and other subreddits such as the_donald are infamous for causing such bans. Or you’ll have admins of discord servers and telegram groups using their connections to get people banned from other groups you’re in or not in as well, just because they can. And the same thing is already happening in the furry fandom right now. 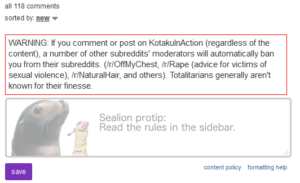 In September 2017, Chipfox made a blocklist he called the AltFurry Blocker, designed to block anyone he (and likely his friends) declared “Nazis”. A few days later, someone doxed him, and he went private, only for the list to resurface under new ownership that preferred to remain anonymous. However, one of the main people promoting the list is Dogpatch Press, a controversial “furry news journalist” who has a bit of a history to him with regards to getting involved in internet fights and controversy. He posted this article bragging about how it lets you protect against “nazis”, and every time some furry drama would come out, him or some other big lefty furry Twitter account would be there shilling it. “Look at those BIGOTS you could be protecting YOURself from with the BLOCK LIST”.

However, while the article was your usual fluff piece the boldest part came in the end.  See, banning people from Twitter wasn’t the endgame, oh no, the endgame was to blacklist undesirables from the fandom. In the end, Dogpatch brags about how a Furaffinity Blocklist and a “Do Not Commision” list are coming soon. Even though the latter sorta “exists” already on a truly dead blog site, something tells me the criteria wouldn’t be scamming artists or artists too busy jacking off to draw art, and instead “THIS GUY POSTED A THING ON TWITTER”. Thankfully, they’re not out there (yet).

This is what these kinds of people want. They want control, they want to have lots of power, without gaining it the “usual” ways. And in the end, they want it to be like the video game industry, where you have a choice between 2 political opinions that are allowed: apolitical, or the canned feel-good Tumblr brand of leftist politics, and it’s pretty damn hard to be apolitical. In the gaming biz, all that’s needed to ruin a career is just a few old tweets and unless you’re rich enough to fund your own game and be your own boss, complete with no publisher interference, you’ll find yourself in a hard place when your old tweets resurface hours after that big E3 showing. You’ll likely get pressured into giving an apology as genuine as a North Korean apology, just like Tim Soret did. And as a bonus, the people who made you apologize won’t accept it, and will either still shit on you or worse, make you lose everything you worked for, especially if you didn’t play your cards right.

Meanwhile in the furry fandom, you already have some artists wanting to blacklist people from commisions, and “vet” others before they can get commisioned. A while back, a person very notorious in parts of the furry fandom who went by Dionysius Tragos tried to commision a obscurish furry artist and of course like most furry artists will do, he made a callout post saying do not deal with this commisioner. However, the key takeaway was in the replies, where the artist urged to vet commisioners, and to write in your Terms of Service to only accept commisions from specific people.

Just the previous month, that actually happened when a semi-known YouTuber, YourPalRags had a commision denied by a leftist furry artist who disagreed with his political views, and he found himself at war with them on Twitter. A few months later, his Twitter account was banned. 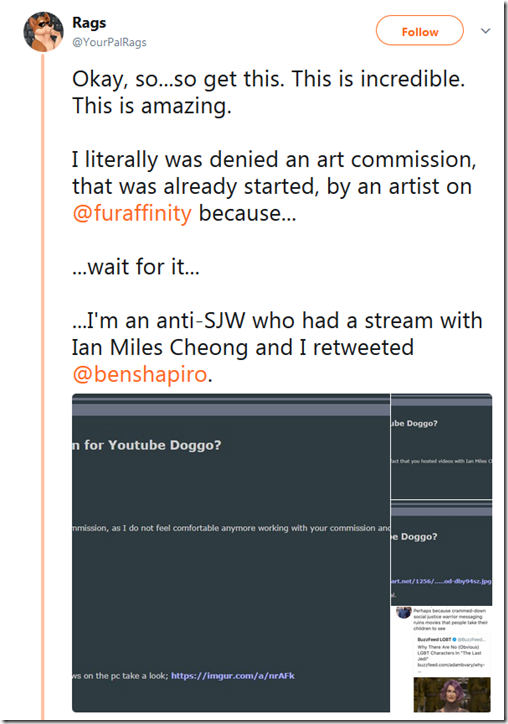 This leads to what happened today with a friend. When you have people bragging about, pushing for, and actually practicing deplatforming, this spreads fear among furries. You have Twitter addicted furries worried. Worried that something they did or do will get themselves on a blocklist. Worried that they will not be allowed to have as many friends or will be blocked from getting commisions from an artist they really like (if you really want the art, you can just do what the public enemies of the “do and just get some Asian/Russian artist who doesn’t give a shit about petty drama and just wants some money to get a burger from Wendy’s). A friend who made more political tweets in the past tried to stay netural, and after finding himself blocked by a cute fursuiter started worrying. He was asking if he ended up on a blocklist, was asking how to delete old tweets thinking that could save him from getting a spot on the list, and got worried, worried it’d fuck him over somehow. And back in September, a furry I knew who’s been in the fandom for a long ass time and who got into yiff back in the days of AOL decided to respond to this kind of warzone like community in the best way he could.

If anything, being on Twitter is a losing game, you’re never going to win. The longer you have an account on that site, the more block lists you’ll inevitably end up on. If you make a new account, you’ll end up on another list. My last account was on a list, my current account is on a list. Trying to stay apolitical is extremely hard, especially when you have people online who screech about how everyone needs to “DO SOMETHING”, and when you consider that O’Sullivan’s Law has been a talked about thing lately. It’s like the alingment system in the video game Shin Megami Tensei. You can try to stay netural, but it’s hard to do when the game is rigged against you, you have to pick one side or another. If you lean too much towards one side, a specific character stays with you and recruiting demons of specific alingments gets harder, at least from what I can recall. In the end though, there’s only one way to stay out of it all. 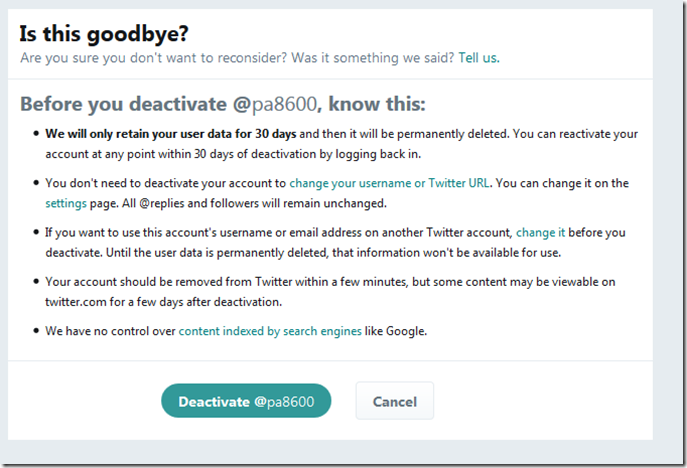 One thought on “Blocklists: Guilt by Association.”